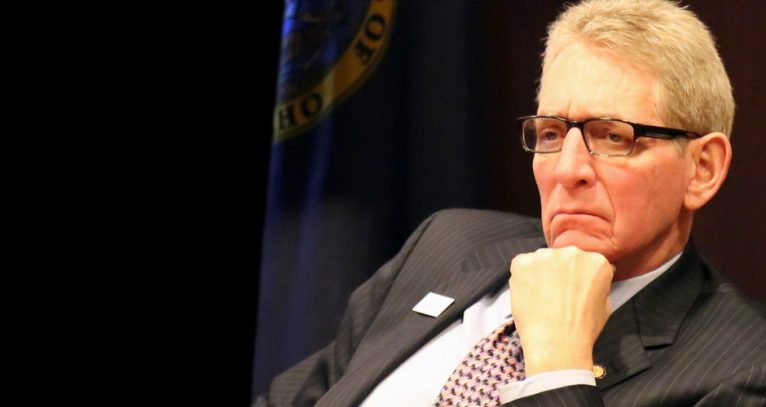 A Spokesman-Review article written 17 years ago has new relevance now that Sen. Bob Nonini is running for Idaho Lieutenant Governor.

The article reveals that the North Idaho Senator was arrested in 1983 for possession of cocaine with intent to deliver. He also later acted as a confidential informant in a major drug sting codenamed “Tailspin.”

The story gets even more bizarre, however, in that Joe Taylor—the pilot who flew a plane co-owned by Bob Nonini “to Mexico, Florida and Texas” while allegedly smuggling cocaine—was killed in a mysterious crash attributed to “pilot error.”

Despite Bob Nonini’s denial of any knowledge of Taylor’s activities, “wrongful death civil suits filed against Nonini in connection with that crash forced him to file federal bankruptcy protection in 1990,” according to the article.

Though the article is available as a PDF file hosted on the Spokesman-Review website, we have reproduced it below for ease of reading.

UPDATE: In the 2001 interview reproduced below, Nonini said, “I was in a guy’s car. He had marijuana under the seat. I had no idea. We were both arrested, and the charges were dismissed.”

Asked if he thought it was a mistake that the arrest record listed the drug as cocaine, Nonini replied: “I would think so.” He denied ever using or selling cocaine.

Bob Nonini, a leading candidate to replace Jack Riggs in the Idaho State Senate, pulled out of consideration Wednesday amid questions about a previous arrest for cocaine distribution.

Nonini, 46, chairman of Kootenai County’s Republican Central Committee, said he still believes that he is the best candidate to replace Riggs.

But changes in his work – not his arrest 17 years ago – convinced him to withdraw as a candidate, Nonini said.

“I don’t think the time is right to go away from the business,” said Nonini, who is merging his insurance business with an accounting firm run by his wife.

Nonini said his decision had nothing to do with questions from The Spokesman-Review regarding his 1983 arrest for possession of cocaine with intent to deliver. Nonini acknowledged that he later acted as a confidential informant in a major drug sting codenamed “Tailspin.”

In an interview Friday, Nonini said: “I’ve never been arrested, convicted, not a bit.” But court records obtained Wednesday by the newspaper suggest otherwise.

According to the National Crime Information Center, Nonini was arrested Nov. 8, 1983, by Kootenai County sheriff’s deputies for possession of a controlled substance with intent to deliver. Court records state that the substance was cocaine.

When asked about those documents on Wednesday, Nonini remembered most details about the arrest.

“I was in a guy’s car. He had marijuana under the seat. I had no idea,” Nonini said. “We were both arrested, and the charges were dismissed.”

Asked if he thought it was a mistake that the arrest record listed the drug as cocaine, Nonini replied: “I would think so.” He denied ever using or selling cocaine.

Nonini said his attorney at the time told him that since the case was dismissed, because of an illegal police search, “that I never needed to report it.”

Nonini said the dismissal was not connected to his decision to become a confidential informant in the drug sting involving federal, state and local agencies.

Clark has a post office box in Coeur d’Alene but no phone listing, and could not be reached for comment.

Nonini said state narcotics investigators approached him in the late 1980s and asked him to serve as an informant so he could introduce Clark to Tom Cannarozzo, who was Nonini’s business partner at the time.

Clark “was a major cocaine dealer, and the state asked me to help,” Nonini said. “I’d do it again if I could.

“I want the right twist on that so people understand that I did the right thing.”

Coeur d’Alene attorney Glen Walker, who was the Kootenai County prosecutor at the time, remembers the sting that targeted Nonini, Cannarozzo and their pilot friend, Joe Taylor.

Those three men “were the subjects of a very intense investigation,” Walker said. “We spent huge amounts of time working with the Idaho state narcotics officers to get wiretaps and things of those nature done.”

Walker could not remember if Nonini was ever arrested or how he became an informant.

“A person becomes a confidential informant because they have extensive contacts in the narcotics trade,” Walker said. “If you did not have that kind of knowledge, you would be no good to anybody and you would be in great danger.”

Walker also said that people have to have a good reason to become an informant.

“And that incentive was not money. It’s legal,” he said, referring to immunity from charges.

Nonini, however, said he received no immunity from prosecutors for helping investigators arrest Clark.

According to court records, one of Clark’s convictions resulted from a meeting he had on Feb. 9, 1989, with Nonini and Cannarozzo. They met Clark at a Holiday Inn in Coeur d’Alene and purchased $2,200 worth of cocaine.

Another conviction stemmed from a meeting on March 10, 1989, when Clark visited Nonini at his home at W. 5900 Harbor Island Drive, according to Idaho State Police records.

Nonini helped Clark weigh and package the cocaine at a table in Nonini’s house, the records state.

“Clark and the male subject who owned the house finished packaging the cocaine and Clark put the cocaine in his truck,” according to notes taken at the time by ISP investigator Dan Thornton.

Clark and a woman were arrested as they left Nonini’s house with the drugs.

Nonini said he knew Clark as an acquaintance from the Silver Valley, but denied associating with the drug crowd.

“I’m not sure how (Clark) would trust me to introduce him to someone,” Nonini said.

“If this is guilt by association because I had friends who were involved with things that could have been illegal, I guess I am guilty.”

ISP Capt. Wayne Longo, who worked on the sting, said he will never talk about past cases involving confidential informants.

Prosecutor Bill Douglas, who took office the year Clark was convicted, said he couldn’t remember anything about a case involving Nonini.

“This obviously was not a remarkable case because I didn’t remember it,” Douglas said.

One investigator remembers the case quite well. It was Dean Roland’s first investigation as a state narcotics officer.

Roland, now the police chief in Siren, Wis., said the operation got its name, “Tailspin,” because of the twin-engine airplane owned by Nonini and Cannarozzo.

Investigations “have to be pretty good sized to make it a federal task force case,” Roland said. “I was assigned to monitor the phone lines.”

Roland said he doesn’t buy Nonini’s story of how he came to be an informant. “I don’t remember anyone just walking in to help,” Roland said. “We got informants for the most part by arresting people and then played ‘Let’s make a deal.'”

Roland said investigators tracked the pilot, Taylor, who flew the plane “to Mexico, Florida and Texas” and smuggled cocaine back to Kootenai County.

The investigation of Taylor ended on July 4, 1987. On that day, he had chartered a flight for the Mission Mountain Wood Band for a concert at Flathead Lake, Mont.

After the show, Taylor took the large twin-engine Beechcraft for a couple of low laps around the lake, according to eyewitness accounts. Unable to gain enough altitude, the plane crashed, killing all 10 people on board.

The National Transportation Safety Board ruled the crash was caused by pilot error.

Asked whether he knew Taylor was using the plane to transport cocaine, Nonini said, “He took it without our permission.” Nonini said he didn’t even know that Taylor had taken the plane on the day it crashed.

However, wrongful death civil suits filed against Nonini in connection with that crash forced him to file federal bankruptcy protection in 1990, he said. “I did that on the advice of my attorney,” he said.

After the bankruptcy, Nonini began working as an insurance agent and essentially left his past behind, said former partner Cannarozzo when reached at his home in Henderson, Nev.

“That chapter is definitely closed,” said Cannarozzo, who still keeps Nonini as his life insurance agent.

Walker, the former prosecutor, agrees. “That’s what I always assumed – that he turned his life around,” Walker said.

Sen. Bob Nonini wants the Death Penalty for Women who have Abortions » « Story of a Survivor: Interview with Randy Weaver