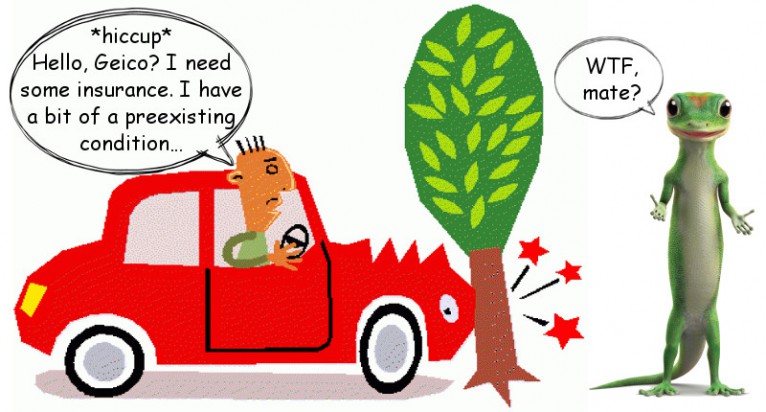 In what can only be described as a ‘duh’ moment for those of us who have been paying attention, a new Blue Cross Blue Shield Association report reveals that patients in Obamacare are sicker and need significantly more medical care than those in employer-sponsored plans.

The study, the first of its kind to look at millions of enrollees across the country, found that Obamacare members have higher rates of costly illnesses such as diabetes, depression, hypertension, heart disease, HIV and Hepatitis C.

They also use more medical services — including emergency rooms, in-patient hospital care, doctors and prescriptions than patients in employer-sponsored plans. Their cost of care was 22% higher than those in work-based health plans in 2015, or $559 a month, on average, for Obamacare enrollees versus $457 for those in employer plans.

What does that mean? Steep rate hikes for 2017 and insurers leaving the Obamacare exchanges in droves.

The fact that these patients are sicker than expected is putting some insurers in a financial bind. Several have reported big losses and have questioned whether they can afford to remain in the Obamacare market. This group includes UnitedHealth, the nation’s largest insurer, which expects to lose nearly $1 billion on Obamacare in 2015 and 2016 and may not participate in 2017.

Some Blue Cross plans have also come under pressure.

Highmark, the nation’s fourth-largest Blue Cross plan with members in Pennsylvania, West Virginia and Delaware, said its Obamacare members are older, have more chronic conditions and consume more health care services than its employer plan members. As a result, the company has lost more than $773 million in its first two years on the exchanges. It called the losses “unsustainable.”

Meanwhile, Blue Cross Blue Shield of North Carolina reported $282 million in Obamacare losses in 2015. To counter this, the company raised its rates an average of 32.5% for 2016. Its CEO, Brad Wilson, has said the insurer may exit the market in 2017.

None of this is surprising, of course. Obamacare was based on a false premise that insuring those who couldn’t afford insurance would somehow bring costs down for everyone. Even someone who slept through most of Econ 101 could see the holes in that logic. Now the catastrophe predicted by those who opposed Obamacare is coming true. Costs are skyrocketing and the health insurance industry is on the verge of collapse.

Obamacare ignored reality in many regards, but none are perhaps as obvious as its prohibitions against denying coverage or charging more based on preexisting conditions. That would be like forcing Geico to charge the same rates for car insurance to a driver who had never had a ticket or accident and one who was calling from the scene of an accident where he had just wrapped his car around a tree while driving drunk.

Obamacare is failing and unless it is repealed, the entire American healthcare system may fail as well.