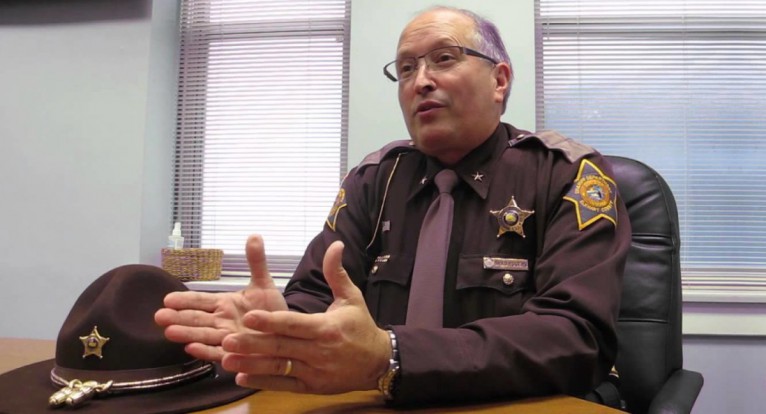 In a world where most local law enforcement are but stooges for the federal government, an occasional hero emerges. Elkhart County Sheriff Brad Rogers is one of those heroes.

After receiving a complaint from a local dairy farmer about frequent harassment by the FDA, Rogers stepped in to help. The farmer had a dairy operation that provided raw milk to a local co-op which the federal government seemed determined to put out of business.

After examining the issue, Rogers sent this message to the Department of Justice:

This is notice that any further attempts to inspect this farm without a warrant signed by a judge, based on probable cause, will result in federal inspectors’ removal or arrest for trespassing by my officers or I. In addition, if any further action is taken by the federal government on (the farmer), while he is in Elkhart County, I will expect that you or federal authorities contact my office prior to such action. I will expect you to forward this information to your federal associates, including the FDA

Within a week of Rogers dispatching his letter, the farmer was informed that a summons ordering him to appear before a grand jury had been dismissed, and neither the FDA nor the DOJ have bothered the farmer since.

If more sheriffs would stand up to the feds the way Rogers did, we would all suffer far less abuse by the feds. That’s why electing constitutional sheriffs should be a primary goal for all those who wish to push back against federal tyranny and the federal occupation of the West.

The full “ask the sheriff” column written by Rogers explaining the situation is below:

On Dec. 1, 2011, I received a call from a farmer in Elkhart County who had a dairy operation that was part of a share herd for a food co-op. A food co-op is an organization that the public can pay a fee to join. In return, the member receives food grown without genetically modified features and preservatives. A share herd is a private contract between the farmer and the co-op so that the members can obtain raw (unpasteurized) milk.

I don’t drink raw milk because it’s not convenient for me. However, if I lived on or near a farm, I’d have no problem drinking raw milk. Many of our parents/grandparents drank raw milk and survived. There are risks with raw milk, but careful handling and storage will mitigate the risk. Many people believe that raw milk is healthier to drink than the pasteurized version. There is no law in Indiana that prohibits the distribution of raw milk in this fashion. In short, I don’t believe the government should be our nanny and telling us what we can or cannot drink/eat.

This farmer said he was having problems with the Federal government. Specifically, the FDA was inspecting his farm without a warrant as much as every two weeks. Typical inspections occur annually. The Department of Justice (DOJ) had subpoenaed him for a grand jury in Michigan in which he was to bring his production documents. The Feds wanted to make this farmer an example.

My research concluded that no one was getting sick from this distribution of this raw milk. It appeared to be harassment by the FDA and the DOJ, and making unconstitutional searches, in my opinion. The farmer told me that he no longer wished to cooperate with the inspections of his property.

I sent an email to the trial attorney of the Department of Justice: “I understand that you have made recent requests to (the farmer) for documents and to appear before a grand jury, and he has had a number of inspections and attempted inspections on his farm within Elkhart County. This is notice that any further attempts to inspect this farm without a warrant signed by a judge, based on probable cause, will result in federal inspectors’ removal or arrest for trespassing by my officers or I. In addition, if any further action is taken by the federal government on (the farmer), while he is in Elkhart County, I will expect that you or federal authorities contact my office prior to such action. I will expect you to forward this information to your federal associates, including the FDA.”

On Dec. 6, 2011, the farmer received a certified letter from the DOJ dismissing him from appearing at the grand jury. Now, over four years later, the FDA inspectors and the DOJ, have not returned to the property since I interposed for the farmer. Some have suggested it was my interposition that caused the feds to stand down. I have no way of knowing this for sure, but the evidence would suggest so.

Your local elected officials to include commissioners, county and city councils, mayors, police chiefs, state reps and state senators, governor and sheriffs can stem the tide of federal overreach if they apply just a little backbone in supporting and defending the Constitution. Expect it! Demand it!

Some bloggers and natural food writers have hailed me as a hero. I’m no hero. I’m just doing my job. Whether you are conservative or liberal, I will be a guardian of the Constitution for you, and will not stand idly by while the rights of citizens of my county are trampled, whether by criminals or an overreaching government.