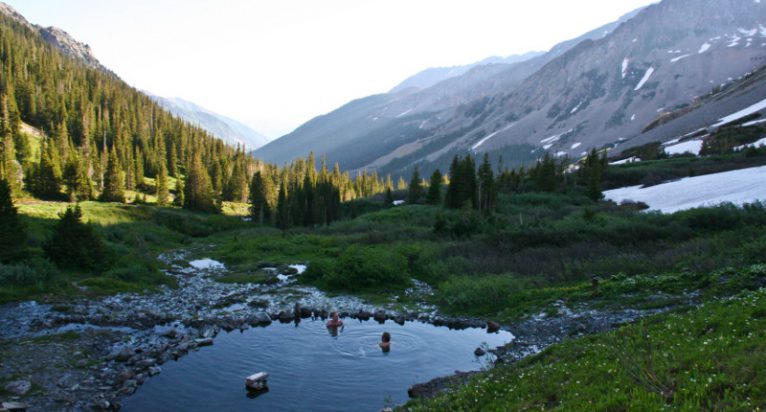 This article was written by Collin Szewczyk and was originally posted here.

The U.S. Forest Service will consider various methods, including a reservation system for overnight visitors to the heavily traveled Snowmass-Maroon Bells Wilderness, to better manage the glut of hikers flocking to the popular area each year.

Calling Conundrum Hot Springs “our biggest problem,” District Ranger Karen Schroyer said Tuesday that the process to limit use there would begin next year, and other facets of an adaptive management plan would follow. She and other representatives of the Aspen-Sopris District met with the Pitkin County commissioners to outline challenges facing the region.

The agency will conduct an environmental assessment of the wilderness area, as well as a review under the National Environmental Policy Act, Schroyer said.

The permitting process will reward those who plan ahead with a more enjoyable excursion, she said.

One idea being tossed around it to have visitors watch a video and take a test on www.recreation.gov before a permit would be issued. The goal is for people “to have what actually might be a wilderness experience in the wilderness,” Schroyer said.

“I think this plan will allow us to limit use as needed as we move forward in the future,” she said. “At Conundrum Hot Springs, for instance, we can allow 20 groups of people at one time. … That would dramatically limit overnight use on some heavy holiday weekends up there, because in the past, we’ve had upwards of 75 groups at a time camping.”

The Four-Pass Loop would be more complicated because there are four or five trails that can access that trek, she said.

“We want to get Conundrum Hot Springs, which I would say is our biggest problem, under way, and get that implemented, and then we’ll jump into the Four-Pass Loop after that, but nothing [will happen] before summer 2017,” Schroyer said.

A public comment period will also be held ahead of implementation.

The district’s lead wilderness ranger remained in the Bells area over the winter to develop a capacity analysis, Schroyer said. That effort was funded by a grant from the Aspen Skiing Co.’s Environment Foundation.

“Through this analysis, we’ve come up with basically a baseline capacity limit for the entire wilderness, not just from the Four-Pass Loop and Conundrum,” she said. “We’ve learned, through reaching out to many other forests and wilderness areas that are already under permit systems, that the best thing to do was not to focus on one or two areas [but] to think broad in the terms of long-term management of the wilderness area.”

An adaptive management plan to allow the Forest Service to make changes throughout the entire wilderness based on yet-to-be-determined thresholds is being put together. The wilderness area will be broken up into zones based on different drainages, and each will have a capacity assigned to it.

“Once those capacities are reached, we’re looking at different opportunities for management,” she said. “We’ll identify more specific designated dispersed campsites. If we’re having problems with human waste, we’ll require wag-bags so they can carry out their human waste.”

Campsites may also be relocated to address issues that come with high use.

Schroyer said specifics will be outlined in the proposed action plan, which will be forthcoming within the next month. She noted that the Garfield County commissioners recently gave the thumbs up to the adaptive management plan.

Pitkin County Commissioner Michael Owsley suggested that the Aspen schools be involved in the public process, since students often hike in the Snowmass-Maroon Bells Wilderness on school trips.

“It’s contributed to the education of eighth-graders for 40 years, and the one experience that they can actually recall and cherish in school, is that experience in outdoor education,” he said.