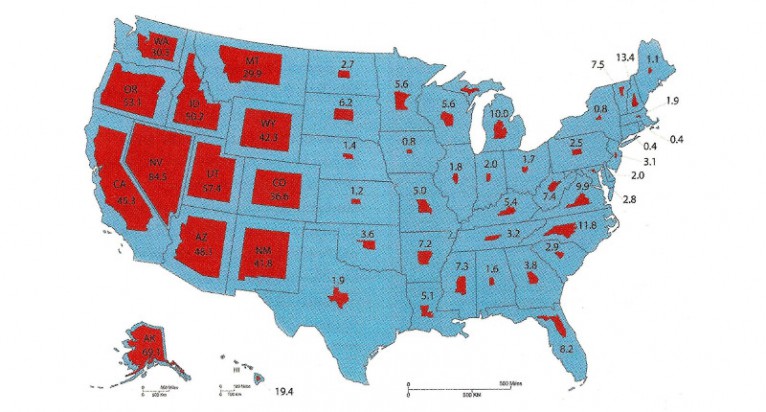 Is the GOP ready to transfer federal lands to the states?

There seems to be a growing consensus among the GOP—or at least among its presidential candidates—that it’s time to begin transferring federal lands to the states. The feds claim ownership of hundreds of millions of acres, most of it concentrated in a dozen western states.

Lost amid the shouting and relentless political attacks, the remaining Republican presidential candidates have found at least one area of agreement: the call for the federal government to relinquish its claim to the gigantic public wilderness of the West, a mostly contiguous patchwork nearly four times the size of Texas.

All three remaining GOP candidates have suggested support for the transfer of federal public lands to state and private control. Texas Sen. Ted Cruz, who has authored a bill for the breakup of the federal land, has issued the strongest calls, especially on the campaign trail in Idaho and Nevada, where most of the state is public land – open wilderness.

A campaign spokesperson said Cruz advocates a transfer of “all public land,” excluding the national parks, out of federal control. That includes most national monuments, national recreation areas, national forests and more. That is not to say they would be sold off – that would be up to the states.

“If you trust me with your vote,” said one Cruz campaign TV ad in Nevada, which is 81 percent federal public land. “I will fight day and night to return full control of Nevada’s land’s to its rightful owners – its citizens.”

While there remains a perverse coalition of politicians, bureaucrats, liberals, and environmentalists dedicated to perpetuating the War on the West, they are going to lose. We will not give up until they do.