With an overwhelming House vote of 54-15 in favor of SB 1389 Friday afternoon, the Idaho Legislature has passed permitless carry. The bill now moves to the Governor where he can sign, veto, or allow the bill to become law without his signature.

If you would like to contact Idaho Gov. Butch Otter and urge him to support this bill, please send him an email at Governor@gov.idaho.gov or call him at 208-334-2100.

The bill will become law without the Governor’s signature if it is not vetoed within five days (Sundays excepted) after presentation to the Governor.

The votes from the members of the Idaho House can be seen in the image below: 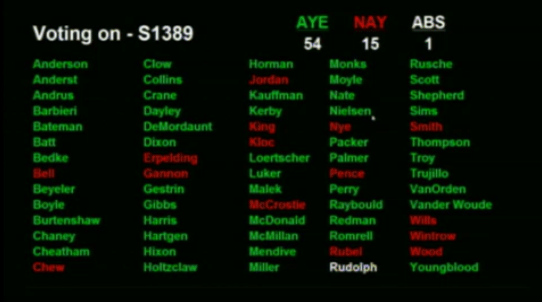 Three Republicans voted against the bill. They were Rep. Maxine Bell (R-Jerome), Rep. Richard Wills (R-Glenns Ferry), and Rep. Fred Wood (R-Burley). Both Bell and Wills face challengers in the Republican Primary. Wood does not.

The bill is supported by the Idaho Second Amendment Alliance, Gun Owners of America, the NRA, the Idaho Fraternal Order of Police, and the Idaho Sheriffs’ Association.