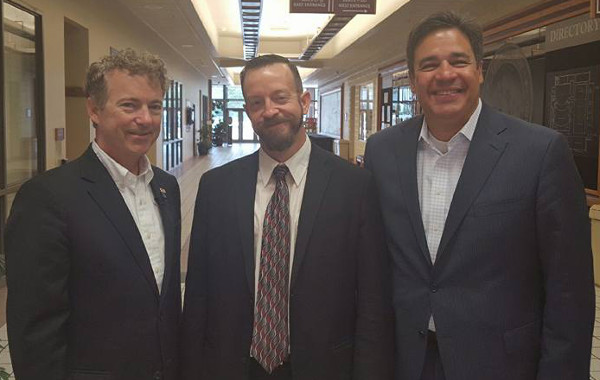 The following election strategy information comes from Ryan Davidson, one of the original founders of Idahoans for Liberty.

This is an urgent message regarding ID4L’s 2016 election activity, so please make sure you read it all.

Firstly, just to get the simple stuff out of the way, you may have heard that this is going to be a weird year in Idaho for elections. For the first time ever, Idaho will have a separate PRESIDENTIAL PRIMARY, held on March 8th. If you’re saying to yourself, “wait, didn’t we just have a first-ever Presidential Caucus four years ago, what’s going on here,” you’re not alone.

Here’s what happened: Prior to 2012, the Presidential Primary was held on the same date and on the same ballot as our regular May primary election. But because the Republican Presidential nominee had historically secured enough delegates to win long before May, Idaho had no real say regarding who becomes President. Because the Legislature would not change the election date, the Republican Party therefore decided to try a caucus that they could run themselves independent of the state. This resulted in the historic first ever 2012 Idaho Presidential Caucus.

Three years later, the legislature decided to spend the money to have a separate, early, state-run Presidential Primary, and a majority of the Republican State Central Committee agreed to cancel the caucus (much to the dismay of caucus fans like me.)

So, in conclusion, the Idaho Presidential vote will be held on March 8th at your regular polling place, and the primary election for everything else will be held at the regular May election, falling on May 17th this year.

If you’re a sophisticated voter (as most ID4L members are) you know that the Idaho Primary election is substantially more important than the general election. Because Idaho is a predominantly Republican state, most Republicans candidates who make it through the primary will automatically win in November. That’s why ID4L has focused so much attention on the Primary: It’s our best way to vote out establishment anti-liberty Repubs and to replace them with true grassroots leaders.

There will not be that many races on the Primary ballot this year, since most statewide and county seats are four year terms and they were all up two years ago. This year we will have one US Senate and both Congressional seats on the ballot, along with all the state legislative races, as they serve two year terms. In Ada County, we will also have only two Commissioner seats and the Sheriff race to deal with.

I believe that this gives us a good opportunity to focus on a small number of winnable, carefully targeted races. I’m sure most readers would agree that First District Congressman Raul Labrador is good, Second District Congressman Mike Simpson is bad, and Senator Mike Crapo is so-so. None of that really matters, of course, since no viable candidate has stepped up to challenge any of them.

Our focus then should be on legislative and county races. In Ada County, I suggest targeting Senators Hagedorn (D.14) and Winder (D.20), and Rep. Pat McDonald (D.15), as they have consistently ranked low on the Idaho Freedom Foundation’s “Freedom Index.”

In Ada County, there will be one open Commissioner seat that we need to actively recruit someone for. The open District 2 seat includes all of Legislative Districts 14, 15, and 20. You can see the commissioner district map here.

In the other seat, former Commissioner Sharon Ullman will challenge incumbent Dave Case. I am strongly endorsing Sharon Ullman. The Sheriff’s seat is also on the ballot, and it would be great to recruit someone for that as well.

The Ada County Highway District has (I believe) three seats open this year. These are non-partisan seats. More info here.

We are continuing the Precinct Committeeman Project this year! These are the small Republican Party seats that are elected every primary along with the other officers listed above. “PC’s” run the Republican Party from the ground up. Amongst other things, they pick delegates to the state convention, who pick delegates to the national convention, where the presidential nominee is selected. They vote on party policy (like whether to have a primary or a caucus) and can choose candidates to fill vacancies in any public office! (Just last year the Ada PC’s picked the new County Sheriff and Prosecutor!) PC’s decide if the state party is going to be a grassroots party or an establishment party. And over the last four election cycles, we’ve managed to take back over half the state party from the establishment!

But we need your help to keep it going. Every two years we need a new crop of people to run. Between Ada and Canyon County, we need over 200 volunteers to fill these positions. Signing up is easy! All you have to do is fill out a declaration of candidacy, then mail it to the address below. If you’re an incumbent PC I thank you for your service, and humbly request that you run again so we can take back Ada & Canyon County. Here’s a link to the form.

We’re looking for every conservative, libertarian, and constitutionalist to get involved in our coalition. If you’re outside Ada & Canyon, file your form with the County Clerk or try to track down a coordinator for your area.

NOTE: THE FILING DEADLINE FOR PC’S AND ALL OTHER CANDIDATES IS MARCH 11.

Any questions, don’t hesitate to ask.

P.S. Check out this fantastic article from 2008… the first year the grassroots decided to get organized and take on the establishment, including our own Governor!