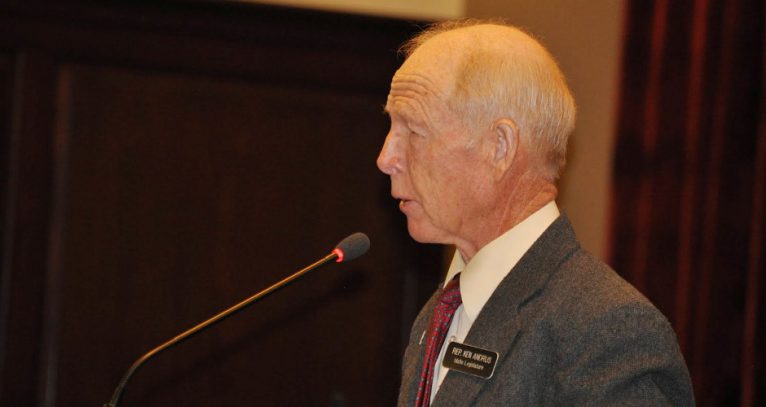 Presently in Idaho there is great concern and public demonstration against federal lands coming under state control. The objections are reasonable. Let’s discuss the issue.

In 2015 Boise State University conducted a state survey in which 56.3 percent of Idahoans favored state management over federal management if it didn’t cost taxpayer dollars.

The objections I continually encountered while in the Legislature and from people across the state were basically these: 1- It would cost Idaho too much to fight a major fire. 2 – Cost of maintenance would be too high. 3 – The Land Board or the Legislature would sell off and privatize the land. 4 – Sportsmen’s access would be reduced as well as wildlife habitat. 5 – Pride of vested ownership by individuals both in and out of state would be lost.

Looking at state versus federally managed forests side by side; typically the state managed are healthier looking with a brighter color. The federally managed usually have a lot of down timber and fuel overload, more dead and bug infested trees. Fire hazard is much less in our state managed forests because we MANAGE them, by harvest, removal of dead growth, etc. If we did experience a catastrophic fire, federal assistance is available as it is with other natural disasters such as tornados, floods, hurricanes, etc.

In 2015, the Property and Environment Research center in Bozeman, Montana, produced a study showing it cost over $2 billion a year of taxpayer dollars to manage Forest Service and BLM lands in the west.

While in the Legislature last year, I requested and received from the Department of Lands Office figures relative to revenue and expenses of state-owned public land in our state. That information revealed $33.50 gross and $12.75 net income per acre from state endowment land. Applying that model to 60.9 percent or 32,294,757 acres of Idaho being either national forest or BLM, it would generate over $1 billion of gross revenue and $411,435,204 net revenue to Idaho. Those figures seem high to me and may have included revenue from state-owned cottage sites, etc. in north Idaho. I realize all federal land in Idaho may not generate at the rate per acre as state land so take half or one-fourth of the $411.5 million. Think what $100 million or $200 million additional dollars annually would do for our schools and our roads.

As I have met with sportsmen the fear of privatization is paramount. They say they don’t trust our state government and the land will be sold off. I agree, I don’t trust us either. That is why I propose an amendment to our state constitution that stipulates that any and all federal land acquired by the state of Idaho from this date forward, by any means, shall forever and in perpetuity belong to the people of Idaho. No governor, Legislature, Land Board or court shall have the authority or ability to sell or trade even one acre. I think the citizens of Idaho would support such an amendment.

As a cattle rancher, bordering national forest, it would enhance the value of my ranch greatly if forest acreage were turned to the state, privatized, and I could buy some. That should not and must not happen. I have no more right to it than a homeless person, a food stamp recipient, a hiker, a camper, a sportsman or any other Idahoan.

Sportsmen are experiencing continuous road and trail closures and restrictions on federal land. It is frustrating. State management and control could correct this. Our sportsmen, of all Idahoans, should be supportive of state control and management, especially if they have input.

Can anyone reasonably argue that someone in an office in Washington, D.C., has better judgement about managing resources in Idaho than qualified people here in Idaho? Sportsmen, the tribes, ranchers, protectors of the environment, loggers, miners — all should and could have a seat at the management table.

Would a tourist from outside Idaho, while vacationing thru our forests be upset or offended if they were healthy and managed properly by state rather than federal managers? I think not.

We Idahoans are continually being reminded that per-pupil funding for schools is at or near the bottom nationally. How do you think schools in a state like Ohio, for example, would be if 60 percent of that state was taken out of production and put in a tax consuming status? We here In Idaho can continue floundering and groveling along like we are in education funding or we can take advantage of our resources.

No one need lose their job. Federal land employees and managers can be transitioned to state employees. If there are more than needed — attrition can apply.

As Idahoans, we need to talk about these possibilities — they are opportunities.

It is a given that Federal land will not be turned to Idaho for control or management as long as Idahoans resist.

Let’s discuss, explore, be considerate of each other and open minded. The result could be positive.

This column was written by Ken Andrus, a former state lawmaker from Lava Hot Springs.