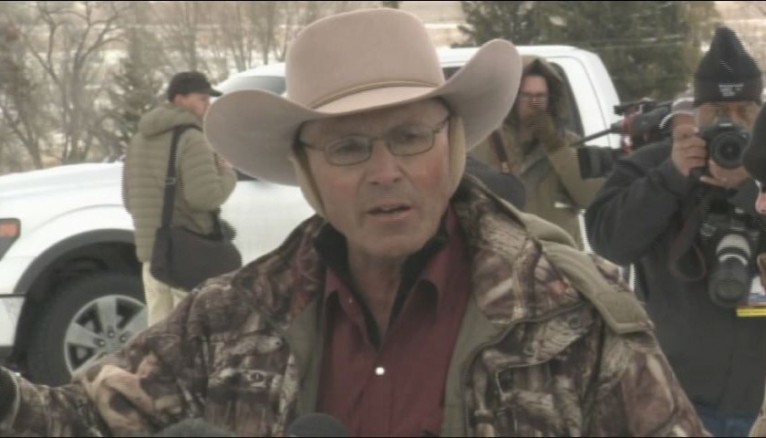 It is being reported that LaVoy Finicum, one of the men occupying the Malheur national wildlife refuge in Oregon, was shot dead by the police even though his hands were in the air.

Brandon Curtiss, leader of the 3% of Idaho, reports the following:

One confirmed deceased during a traffic stop on the remote area of the Highway between Burns and John Day, there was an individual who exited the vehicle during the stop and reported as with his hands in the air at which time they shot him. This is confirmed, however, this is all I have at this time. For sake of the family I will not be releasing the name of the individual. Please be patient as we get more info as to the details.

The Daily Mail is reporting that Ammon Bundy was arrested and his brother Ryan wounded in the altercation. They are also saying that Ammon Bundy and three others were detained at the scene, and they have been charged with ‘conspiracy to impede federal officers.’

UPDATE #1: It is now being reported that at least seven individuals were arrested following the killing of an unarmed Mr. Finicum. These are the individuals we know are being held at this time:

UPDATE #2: Here is a real eyewitness account of what happened yesterday:
Victoria Sharp (who was in the vehicle with LaVoy Finicum) said that dozens of federal vehicles and countless agents were waiting for the group, pre-positioned at a point along on the isolated rural Highway 395, before intercepting the group and making 8 arrests. She has also confirmed that the passengers never drew weapons or attempted to get out of their vehicles before federal agents fired “at least 120 shots altogether” at the vehicle and its passengers. Numerous ‘red dots’ from lasers could be seen pointed on the passengers by federal marksmen, in what was described by this witness as an “ambush” by federal authorities. Sharp said, “I had 20 lasers on me when I got out of the car.”

UPDATE #3: The FBI has released video footage of the LaVoy Finicum shooting which they claim shows him reaching for a pocket in which they claim he had a 9mm semi-automatic handgun. The video was apparently shot from an FBI drone, and the claims made regarding Finicum’s actions are not substantiated by the video footage.

UPDATE #4: A rally will be held at the Idaho State Capitol building on Saturday, February 6th, 2016, to honor and show respect for LaVoy Finicum. We encourage all who wish to take a stand against the injustice of the ongoing federal occupation of the West to join us.

This is a developing story. More information will be forthcoming.

Tribute to LaVoy Finicum » « Is it time to kick the feds out of the west once and for all?