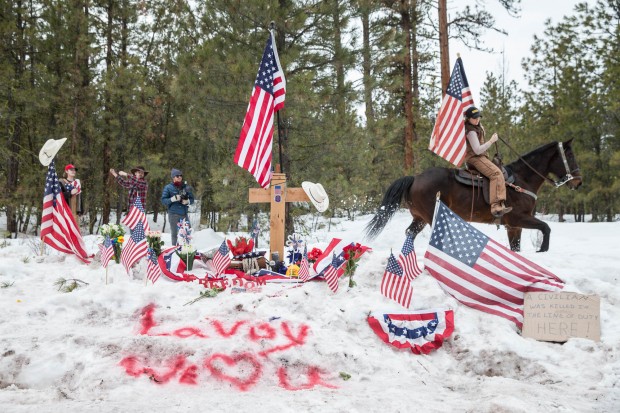 Oregon Live is reporting that the memorial which had been constructed to honor the life and tragic death of LaVoy Finicum was destroyed by vandals, but has since been rebuilt to some degree.

Soon after somebody tore down a cross erected in honor of a dead protester, somebody used its remnants to put a smaller version of the cross back together.

BJ Soper, a leader of the Pacific Patriots Network, has offered $500 for information leading to those responsible for tearing it down. Asked who might be responsible for destroying the memorial, Soper said he didn’t know. “Someone that’s un-Christian, that’s for damn sure,” he said.

Pacific Patriots Network (PPN) is offering a $500.00 reward for the return of all items left in memorial of LaVoy Finicum at the site of his death on Highway 395 outside of Burns Oregon.

Sometime in the past twelve hours, an individual or individuals took it upon themselves to desecrate the memorial site of LaVoy Finicum, a symbol of community grief, loss and healing. While it is evident they did not agree with Mr. Finicum’s stance, it is still a loss of life of a loved one. PPN denounces the vile action’s of those involved and will bring all of our resources to bear for the return of all memorial items.

Federal official have been in contact with PPN and made assurances county, state and federal agencies did not remove the memorial or any items associated with it.