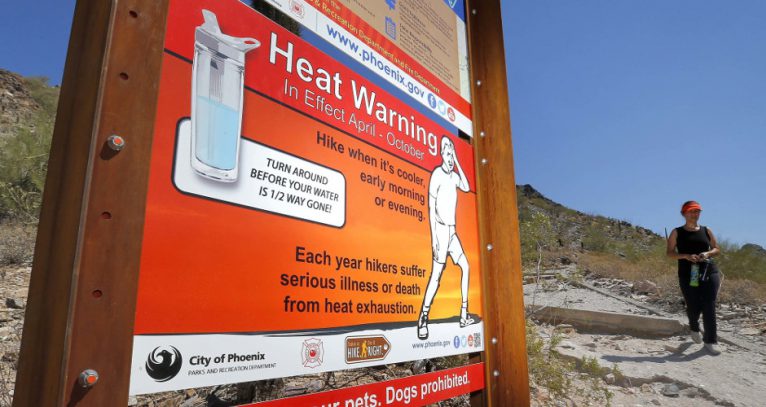 Phoenix may close hiking trails in its more than 40,000 acres of desert preserves during intense heat that statewide already has claimed several lives this summer.

Temperatures reaching 110 degrees would prompt the closure of city trails for people, through a policy under consideration this week. Dogs would be stopped from hiking when the mercury hits 100 degrees.

The Phoenix Parks and Recreation Board, which has authority to implement the rules, will consider the change Thursday.

The closures seek to ensure hiker safety and limit mountain rescues, said Gregg Bach, spokesman for the Parks and Recreation Department. But enforcement of the rules and the consequences for violating them still are “fuzzy,” he said.

More direction on how to manage the potential closures could come from Thursday’s meeting, Bach said.

City code already allows the closure of a park area to protect public health or safety. But citations could be difficult.

A hiker could start on a trail before the temperature crossed the closure threshold, for example, Bach said.

Enforcement also would be a challenge.

Phoenix has more than 200 miles of designated trails with dozens of official access points. People also get to the preserves from numerous unregulated entries.

The city cannot physically block hikers from entering the preserves, Bach said. Phoenix doesn’t have the resources to send someone to each access point, and the parks department wouldn’t close any gates.

But signs would alert hikers to the new rules, under the proposal. Rangers, already sent to busy trailheads during intense heat, could provide face-to-face enforcement.

“We’re still trying to figure out how to manage that,” Bach said.

Councilwoman Thelda Williams said the proposal is the best the city can do considering vast mountain preserves can’t be closed.

“If it doesn’t work, we’ll see how much further we can go,” she said.

The policy instead would escalate the city’s efforts to educate hikers about life-threatening heat, Bach said. The department also wants to limit the danger to first responders who perform mountain rescues, according to the meeting agenda.

The proposal comes after six hikers died statewide in one weekend earlier this month. One woman, a 28-year-old personal trainer, stopped breathing at a Phoenix preserve.

The Phoenix Fire Department has responded to 140 mountain rescues this year as of June 27, according to Capt. Reda Bigler, though the department doesn’t track how many are heat-related.

Hikers are not charged for mountain rescues in any cases, Bach said. The new closure proposal does not explicitly address changes to that policy.

The department looked at the feasibility of something akin to a “stupid motorist law” that charges rescued drivers who ignore posted warnings about flooded roadways, Bach said, but decided to focus policy changes toward education.

The threat of heat exhaustion also applies to dogs, which are permitted on all but three of Phoenix’s trails. Dogs have experienced distress or died while hiking, Bach said, though he did not cite specific numbers. The Phoenix Fire Department does not track calls for dogs.

The city recently started a program to educate Valley hotel concierges about providing visitors hiking recommendations that account for safety.