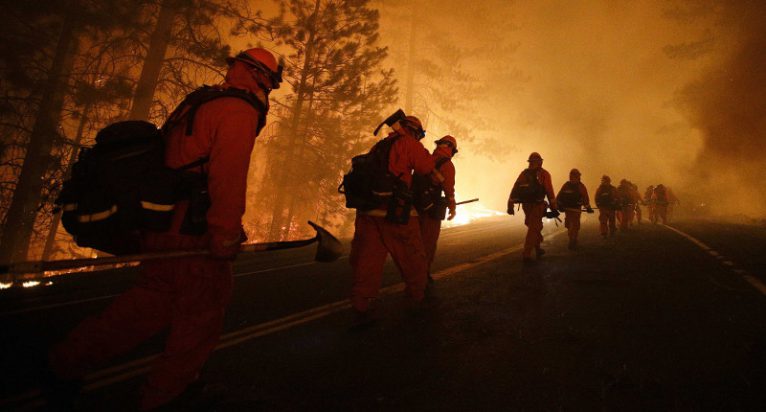 More than 40 rookie wildland firefighters spent the past week learning about their new trade at a camp in the Sawtooths north of Fairfield.

On Thursday, they put out a fire for the first time.

Crew boss Adam McKean knelt down and drew a diagram in the dirt path, explained to his crew what they were about to do and gave them tips like paying attention to the wind and weather and trying to chat and get to know their colleagues as they worked. The firefighters, some wearing the Bureau of Land Management’s black helmets and others from the U.S. Forest Service and wearing yellow or light blue ones, leaned on their tools – some with shovels, some with combis – a tool that combines a pick and a shovel, some carried a pulaski – a combination cutting/digging implement named after Ed Pulaski, the northern Idaho forest ranger who invented it a century ago – and listened.

They headed up the nearby hill into the woods, where a few test fires had been set. Walking in a line – a technique known as gridding, where firefighters find small fires in an area by walking in a grid and covering the ground systematically – they practiced building fire lines, which is when firefighters dig a trench around a fire to contain it by cutting it off from any nearby fuels.

“This is where they put everything they’ve learned all week long,” said B.J. Stauffer, an engine captain with the BLM and one of the co-leaders of this year’s rookie school.

Then, they put the fires out, practicing techniques such as bone piling – piling up branches, logs and other flammable materials that have been left within the fireline so they burn up and out faster.

“It’s important to get down to where there’s no material that’ll burn in there,” said Kurt McDonald, field training officer with the BLM.

One of the values in this training, which is held every year at the Sawtooth United Methodist Camp, is that it brings Forest Service and BLM crews together, Stauffer said. Fire crews from both agencies frequently work together and respond to fires on each other’s land, and the training lets them meet and practice working together.

For 19-year-old Tristan Kulhanek, who graduated from Kimberly High School, his new job, which he intends to make a career of, puts him on the path to fulfill a lifelong dream. He has family members who are firefighters both with the BLM and with city departments.

“It’s always been a passion of mine ever since I was little,” he said.

Kulhanek and the others came to the camp last week, waking up at 6 a.m. and starting their days with an hour of physical training before breakfast. Then, they would take classes until dinner, learning about firefighting and fires. Much of Wednesday was spent outside, practicing gridding and other techniques without an actual fire so they would be ready for Thursday’s practice. When Kulhanek and the others are done, they will be Firefighter Type Twos.

“After tomorrow, we’ll be available to be on fires,” he said.

The National Interagency Fire Center’s Predictive Services released its fire outlook for the summer last week, predicting a normal June fire season for Idaho, but above-normal risk in much of southwestern Idaho and northern Nevada in July and August, due to more rain than normal earlier this year, which has led to an above-average grass crop in the region.

Stauffer said the rookies will likely spend most of fire season in south-central Idaho, but they could also be sent to other states if there’s a big fire and their help is needed.

This area includes both hilly, wooded environments like the Sawtooths north of Fairfield and sagebrush deserts, and they pose different challenges to firefighters. Generally, forest fires move more slowly but take more time and effort to put out, while in the desert you get “light, flashy fires” that consume the sage brush and desert grasses quickly, said Chris Anthony, fire operations specialist with the BLM.

“They move faster,” he said. “But they don’t take near as much effort to extinguish.”