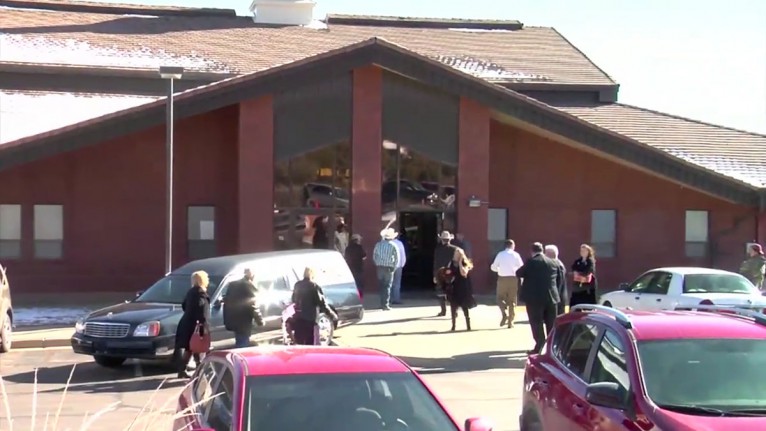 Thousands of people gathered in Kanab, Utah, to pay tribute to LaVoy Finicum, the gentle rancher who was murdered by law enforcement for his part in resisting the federal occupation of the West. The video below shows more.

KANAB, Utah – + Video – It was a solemn yet prideful event for those who attended the funeral of a man they are dubbing a ‘hero.’

Rancher, Robert LaVoy Finicum, 54, of Cane Beds, Ariz., was honored by thousands during a day long good-bye ceremony held by family members at the Church of Jesus Christ of Latter-day Saints he used to attend.

“Anybody that talked to him they just knew where his heart was and what his desires were. They could tell he was a good man.” said Finicum’s daughter Arianna Brown, ” And I’ll forever cherish that.”

Finicum also fostered dozens of children over the years.

People from across the country came to pay tribute to a man they never even met, but are in agreement for what he stood for.

“We as a family want to thank you, we thank you for coming,” said another daughter, Belle Collier. “We thank so many people who have come far and wide, and for the support worldwide. The love that you are pouring out to our family, the support you are giving us.”

“Today, we celebrate our father’s life. But going forward we are calling for a private independent investigation to find out exactly what happened to our dad,” said daughter Thara Tenney.

Finicum was shot and killed by authorities after driving past a road block in eastern Oregon on January 26. He was one of several protestors of BLM land disputes who occupied the Malheur National Wildlife Refuge for 25 days before his death. Two others were also injured during the incident, which some are calling an ‘ambush.’ Eleven other protestors involved in the refuge take over were arrested. Leader Ammon Bundy and several others still remain behind bars without bail.